Why is React Native important?

React Native is one of the most popular open-source UI software frameworks. It allows you to develop fully in Javascript, without having to learn or have previous experience with native platforms. It brings one code base which can be re-used cross-platform so you don’t need separate engineering teams for iOS and Android development.

React Native is often used for mobile applications, but leading media and entertainment companies also use it for smart TV’s and gaming console apps. The big advantage of this approach is that it brings substantial time savings, in terms of initial investment and also for ongoing maintenance, and that it accelerates your time-to-market.

When it comes to adding video streaming capabilities to a React Native app, you have the option to use a commercial React Native video player or go the do-it-yourself route with an open source React Native player. In this article, we’ll compare the two approaches: the open source react-native-video versus the THEOplayer React Native SDK.

We have compared both approaches in terms of 1) device coverage, 2) features, 3) third-party integrations, 4) support, 5) cost, and 6) time-to-market.

One of the main benefits of a React Native video player is its ability to be distributed across multiple platforms. Both react-native-video and THEOplayer offer support for Android and iOS platforms, including tvOS, AndroidTV and FireTV. Both approaches also support the Universal Windows Platform (UWP)* for Windows apps, including XBOX. However, only THEOplayer supports web-based platforms, such as Samsung Tizen and LG WebOS smart TVs.

The features that you need depend on your specific use case, but it's important to ensure that they are available through the React Native bridges. If they are not, you'll need to build the bridges yourself, which requires extra effort and in-house knowledge.

React-native-video provides features like audio only, background audio, audio track selection, and Airplay. THEOplayer has an even more extensive feature set,  also offering, for example, preview thumbnails, casting, and Android media sessions. In addition, THEOplayer is constantly working on developing new features for their React Native wrapper, including support for offline playback and picture-in-picture, which will be available shortly.

In order to make DRM, ad insertion or analytics solutions work with your video player you’ll need integrations. These third-party integrations accelerate your go-live, reduce maintenance effort and allow you to continue your development in Javascript.

What happens if certain features are not working properly on newer or older operating system versions? Or if the bridges require fixing? Suppose you need additional features or third-party integrations, which are not available yet? When it comes to support, a commercial React Native video player like THEOplayer typically offers more options compared to an open source video player such as react-native-video.

React-native-video relies on its open source community for support, with the option to submit issues and pull requests on GitHub.

THEOplayer offers various levels of support, each with access to a team of video experts, who actively develop new features and third-party integrations, follow-up on product evolutions, and maintain the React Native bridges. They can even act as an extension of your team, and help you build bridges to the THEOplayer SDKs for specific features or third-party integrations, if these would not be available yet.

When comparing cost for both approaches it’s important to consider licensing fees, initial development effort and the ongoing maintenance requirements.

In order to determine the overall cost for your React Native video player, you’ll have to add up the licensing fees, initial development effort and ongoing maintenance. If your use case is straightforward, react-native-video could be the most cost-effective approach. For many cases though, the initial react-native video development effort and maintenance cost surpass the THEOplayer licensing fee, resulting in a higher total cost of ownership. 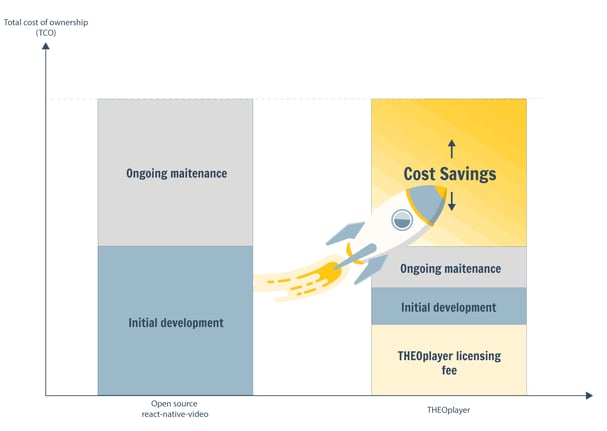 How quickly you can get your app to market with each option will depend on your use case, and is highly aligned with the initial development effort required. If you want to fast-track your time-to-market then THEOplayer is typically the best choice, definitely if you’re looking for premium features, third-party integrations and support for web-based platforms. Leverage the THEOplayer video experts to further fast track your launch time.

Both react-native-video and THEOplayer offer benefits as a React Native video player option. While react-native-video is a good choice for developers looking for a free, open source solution with a solid feature set, THEOplayer offers a more extensive feature set and additional support for web-based platforms, as well as third-party integrations and various levels of support. Ultimately the best choice will depend on your specific needs and priorities. Open source react-native-video might be a great fit for your use case. If you’re looking for a more comprehensive solution that will save you time and effort in the long run, and accelerates your-time-to-market, THEOplayer might be the better choice.