Going Big Screen: How to bring your apps to LG WebOS?

Listen to this blog:

THIS IS A SNIPPET FROM OUR “GOING BIG SCREEN: BRINGING VIDEO TO LG WEBOS” GUIDE WHICH YOU CAN DOWNLOAD HERE.

“Streaming is gaining ground over traditional viewing” is something we’ve heard before. “The big screen is the undisputed leader” is another one of those quotes. In 2018, streaming on the big screen was however limited to about one third of the total viewing time according to Conviva.

By 2019, this percentage had increased to 55%, so what do the latest 2020 numbers say? About 75% of all viewing happens on the big screen. When we look at the devices with most growth, there is no way around smart TVs which grew for more than 200% during the last two consecutive years, allowing them to gain ground on other connected tv devices such as Fire TV and Roku, which grew only 55% (slightly below the 57% average across platforms).

In our previous blogpost, Going Big Screen: Bringing Video to Samsung's Tizen, we zoomed in on the largest brand in the Smart TV space, being Samsung with its Tizen platform, which accounts for about 7% of all viewing time. Now, we will continue with the second largest brand: LG and its webOS platform which accounts to 3.3% of all viewing time. In this blog, we will discuss how to bring the applications for your streaming services into LG webOS platform.

Since 2014, LG has been making use of webOS as a platform. While the platform has a history with Palm, HP and an open source version existing, the main driver behind webOS is LG which bought the platform in 2013. The platform itself is Linux based, but in its essence developing applications for the platform usually does not happen in languages such as C, but applications tend to run in a web environment.

Same as most other smart TV platforms, bringing your app on LG’s webOS platform goes through a store: the LG Content Store. Long story short, the LG Content Store has the same process as most application stores, requiring a (often lengthy) review before your app can be published. As in the webOS name however, apps are developed completely in web technology, being HTML5.

While the web is known for flexible updates, traditional app store processes can slow you down significantly. On webOS however, the “hosted app” approach is quite common: you basically create an app which instructs the platform to load the latest and greatest from the web, same as any old website. While you still have to go through the validation process once to get listed in the LG Content Store, you can bypass future reviews for updates easily giving you the agility which is needed in an era where competition in the streaming landscape is growing by the day. 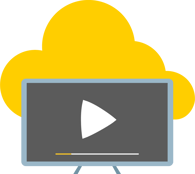 Building an app for webOS (or a webOS enabled website) is quite simple thanks to web technology being the main driver. Most APIs which are used are following the W3C specifications nicely, making it highly similar to developing your website for any common browser. Actually, you can likely reuse most of your website logic, given some tweaking on the UX side to ensure smooth integrations with LG’s Magic Remote. While the Magic Remote allows you to summon a mouse-like cursor on your screen to navigate (which acts from an API perspective in the same way as any odd mouse on a laptop), using standard remote control buttons (which from an API perspective function as a keyboard) still works quite well (and in most apps, better).

In order to bring your content to webOS, you of course need to play it. On webOS this is quite simple, you can bring audio or video streaming to webOS in exactly the same way you do on your website:

But, do you really need to make a choice between Native vs ‘Bring-Your-Own’? In our next blogposts we are going to discuss what is the most effective way to stream your audio or video to webOS.

You can also download the complete version of this topic in our “GOING BIG SCREEN: BRINGING VIDEO TO LG WEBOS” ebook here. Or if you have any questions, don’t hesitate to reach out to our team.