The Retirement of VPAID: What it Means for the Future of Online Advertising

The introductions of new online technologies have changed the landscape for advertisements and how they are used and viewed. This has resulted in new levels of interaction between brands and consumers. In advertising, the increased visibility, reach and position benefits stakeholders, while content creators benefit from additional revenue. Product and service providers benefit from the maximised audience reach and positioning to their target audience.

Chain of Events in Online Advertising

Although the benefits of advertising seem countless, there is a high degree of complexity that comes with online advertising. To deliver an online advertisement there a number of things that need to be taken into consideration: 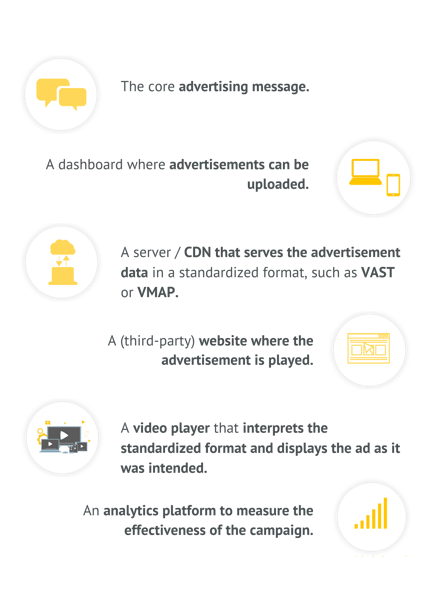 To help structure the entire process, specifications are put in place.  These specifications provide a guiding framework for all stakeholders involved for the creation and placement of an advertisement to the target audience.

The Interactive Advertising Bureau (IAB) is the leading body for standardising online/digital advertisements. Several IAB standards are of interest: VAST, VMAP, VPAID, OMID and SIMID. Together they allow ads to be described, tracked, made interactive and scheduled at the intended time.

The VPAID specification specifies the shared communication layer between player and ad. In 2018, the IAB announced plans to replace VPAID with two successors: a more secure interactive layer and an SDK for measuring viewability. In VAST 4.1 these plans were finalised by introducing SIMID and integrating OMID.

SIMID aims to allow ads' interactivity. Like VPAID, it works by executing custom logic, but it comes with a few differences:

Security first: the code is strictly executed in a third-party domain iframe, which means by design it has no access to the publisher’s page.

The player handles ad playback and keeps the SIMID layer up-to-date about the ad state (e.g. time within the ad, state of the ad, duration of the ad). This allows the SIMID logic to be ad technology agnostic; SIMID can work for regular video ads, but also for audio variants, server-side ad insertion ads, and ads played in native Android or iOS players.

Better platform support: SIMID's technical requirements are loosely compared to VPAID, making them easier to embed in environments that are not entirely written in HTML5.

Player in charge: The playback of the advertisement is handled by the player, which gives more consistent results. The ad can be better preloaded, and the unexpected errors can be handled in a uniform way.

The Introduction of OMID

OMID enables measuring viewability in a standardized way, so VPAID does not have to be leveraged for this. In short, viewability is about verifying whether the ad is actually visible to the end-user (i.e. it is in view, the tab is active). Previously, VPAID ads would require access to the whole publisher’s page, which introduced a security risk as advertisers are third, likely unknown parties, with potentially malicious intentions.

The IAB aimed to phase out VPAID by standardizing the way these metrics are measured, resulting in the OMID specification. To encourage player adoption, the IAB created a software kit (SDK), so the same implementation can be reused by the industry as a whole.

How the Specifications Work Together

VAST, VPAID and VMAP are designed to work together and fulfil different requirements. VAST describes advertisements and how the video player should handle playback. The advertisement can be interactive. If interactivity is required then the advertisement should implement VPAID, or in the future SIMID. 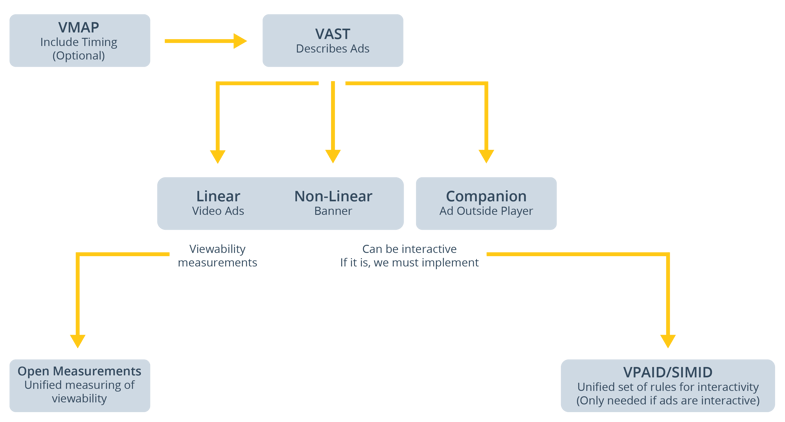 Combined, SIMID and OMID will replace VPAID in the near future. It should, however, be noted that VPAID is still more commonly used today, as the adoption of its successors are still in the initial stages. Realistically speaking, it might take the ad industry a few years to catch up on the new standards and phase out VPAID completely.

How THEOplayer Can Help You Navigate the Advertisement Space

THEOplayer can remove the complexity and handle the heavy lifting on your behalf by:

If you want more information on online advertising, check out our Ultimate Mini Guide to Online Video Advertising here, and our Info Sheet on Client Side vs Server Side Ad Insertion here.

If you have any questions about the new specifications, the retirement of VPAID or anything else related to advertising, don’t hesitate to contact one of our THEO experts.