The following article provides an insight into the key technologies associated with video advertising and more specifically, key considerations when incorporating advertising into your video service. We will address the relationship between VAST, VPAID and VMAP; analyse the key differences between inserting ads on the client versus server side and explain the role that out-stream ads can play as part of an advertising monetisation model.

At its core, online advertising is all about increasing the market for your product and/or service and encouraging a purchase decision. This has been somewhat haphazard with traditional marketing methods such as print or street ads, due to challenges in:

The emergence of online technologies has had a profound impact on the way advertising is used and viewed and has resulted in a new level of interactivity between brands and customers. Stakeholders across the advertising chain derive significant benefits from the increased visibility, reach and positioning possibilities online advertising allows. Content creators gain an additional revenue source beyond the physical content itself while product and service providers benefit from the increased audience reach and the more granular positioning to their target audience. 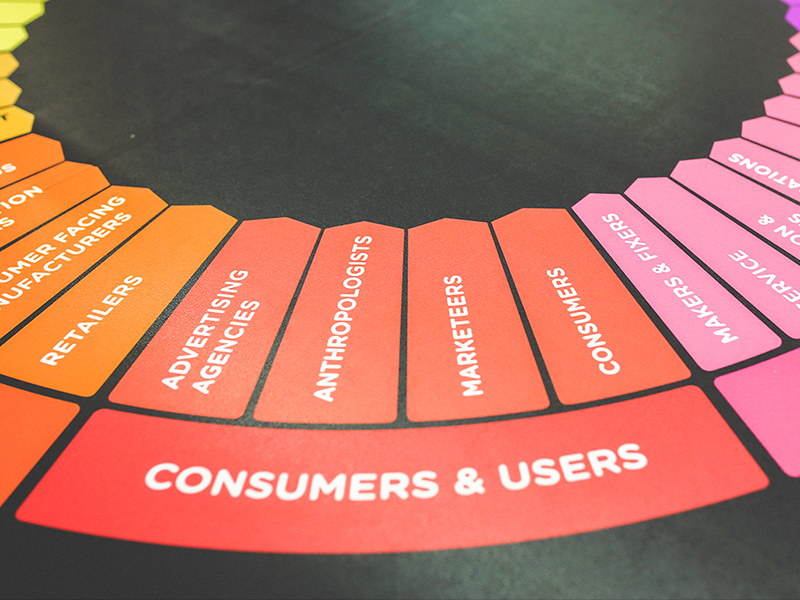 The chain is centred on displaying the advertisement and showcasing the products or services to attract more customers. To help structure this process, advertisement specifications have been created to help guide the various steps. These specifications are intended to provide a guiding framework for all stakeholders involved in the creation and positioning of an advertisement to its intended audience.

The IAB, Interactive Advertising Bureau, was founded in 1996 and is the leading body for standardising online/digital advertisements. The Bureau form a panel consisting of more than 650 leading media companies in the United States, who, together, make up 86% of the American online advertisement market.

In the following section we will discuss three standards created by IAB : VAST, VPAID and VMAP. Together, they allow ads to be described, tracked, made interactive and scheduled at the intended time.

A simplified VAST specification is included below:

Please disable your AdBlocker to see the ads

Linear: a video ad played inside a video player. The player will pause the content for this type of advertisement.

Non-linear: a banner that pops up inside a video player. The ad doesn’t interrupt the content making it suitable for specific type of events such as live streams.

Companion: advertisements shown outside the player. They usually complement a linear / non-linear ad.

VAST also specifies ad pods. Ad pods are groups of advertisements which should be played back-to-back.

Video Player Ad Interface Definition (VPAID) allows advertisers to implement custom advertising behaviour whilst ensuring the player controls the interaction. This allows the advertisement to react and show additional information based on individual client behaviour, such as navigating through content and showing more information. To ensure this is controlled seamlessly, the video player must communicate and control the advertisement. This is where VPAID comes in. It defines what should be implemented, so the video player and advertisement can work together in harmony.

It is important to note:

VMAP allows time scheduling for one or multiple ads

(Digital) Video Multiple Ad Playlist (VMAP) makes it possible to specify when VAST should be played. In terms of timing a distinction is made between:

VMAP allows you to specify exact timing for one or multiple advertisements. It is important to note however that VMAP was mainly designed with Video on demand (VOD) in mind, leaving some questions open for the live video case.

It is possible to add extensions for both VAST and VMAP to increase functionality. This option should be carefully considered given commercial players are not typically expected to support extensions.

Google’s DoubleClick for Publishers (DFP) is an example of such an extension. DFP adds, amongst others things, URLs for tracking zoom taps on mobile devices and conversions of users. The expected behaviour for these extensions are implemented in Google IMA (Interactive Media Ads), which is integrated by most (commercial) video players. On top of that, Google IMA implements VAST, VMAP and VPAID, especially optimized for DFP content.

How VAST, VPAID and VMAP cooperate

VAST, VPAID and VMAP are designed to work together and fulfil different requirements. VAST describes advertisements and how the video player should handle playback. The advertisement can be interactive. If interactivity is required then the advertisement should implement VPAID. Timing can be added via VMAP, but this is optional. VMAP will refer to a VAST, but never to another VMAP. VAST can refer to another VAST, but never to a VMAP file. 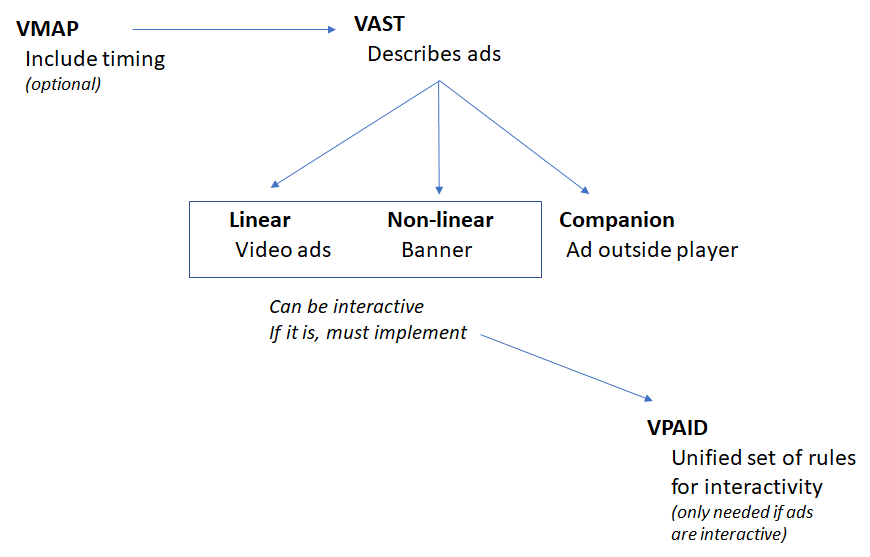 Client side versus server side ad insertion

There are two major ways that advertisements can be inserted in video content:

Both approaches have their strengths and their challenges:

Client side advertisements are especially useful for video-on-demand, since advertisements in the stream (inserted on the server-side) can be easily skipped. VAST, VMAP and VPAID are standards based on consistent, expected behaviour, making it easy to predict.

A drawback with this approach is that users can install ad blockers thereby preventing the advertisement from playing. As a result, playing advertisements on the client side cannot always be guaranteed. One way to solve this is to block playback when an ad blocker is detected.

More challenging is how a video player should detect that an advertisement is playing, adjust the user interface and add a link to the advertised company. At this point, there is no specification on how this should be done, so every server side ad insertion might have a different way of providing this information. For instance, YoSpace does this by using ID3 data within the track. You need a video player that is able to detect this information and react accordingly.

The approach to handling out-stream advertisements varies. The best known use case is where the player plays the advertisement in a muted state as soon as the player is visible. Once the user interacts with the player the volume is automatically enabled. The player is paused or resumed based on the player’s visibility.

How THEOplayer can help your business

Implementing video advertisements can be challenging:

THEOplayer can remove the complexity and handle the heavy-lifting on your behalf:

If you have more questions about how THEOplayer can help you monetise your content visit our Demo Zone page or simply get in contact with our team of streaming experts.