VR360: Immersive Engagement for your Viewers

Amid the global circumstances today, video is providing the connections we need, now more than ever. While across the globe people are locked down in their homes, online video is being consumed and relied upon by millions. Consumers are looking for engaging video content, and what better way to engage your audience than with virtual reality and 360 video? While today’s crisis creates a lot of uncertainty, there is a massive opportunity for 360 video and rapid growth.

Across the industry, including at THEO, we’ve seen a spike in the usage of VR and 360 video. VR is video content which replaces your vision with video, or replacing your reality, to make it feel like you are somewhere else (think the HTC Vive, Playstation VR or Oculus Rift goggles). This is not to be confused with augmented reality (AR), which instead adds to your vision (think Pokemon Go). In a time where schools, stadiums and corporate offices are void of life, video content providers are getting creative in the way they deliver content.

Producing 360 Video: The Most Standard Approach

360 video is captured by cameras which capture video in all directions at the same time to create a spherical view. This is achieved by two fish-eye cameras facing in opposite directions, and the two images are stitched together by the camera to give a 360° view. In order for a player to recognise the video is in 360° and not a flat, 2D video, metadata will need to be added. The biggest challenge in creating 360 video is delivering the same high quality resolutions, as compared to traditional video. This is where the use of adaptive streaming comes in, which would allow the player to adapt the bitrate to the available bandwidth of the viewer, allowing the 360 video to start faster, the highest quality video to be shown and without buffering.

There are two types of VR formats for video: monoscopic or stereoscopic. Monoscopic video was the first format used for VR. The format is usually an equirectangular video container with an aspect ratio of 2:1, or in other words it is one video for both eyes projected on a sphere around the viewer. Only monoscopic video can be viewed with or without a VR headset.  Monoscopic is seen as more versatile, and can be used successfully for videos with dynamic movement, engaging social posts or website videos. 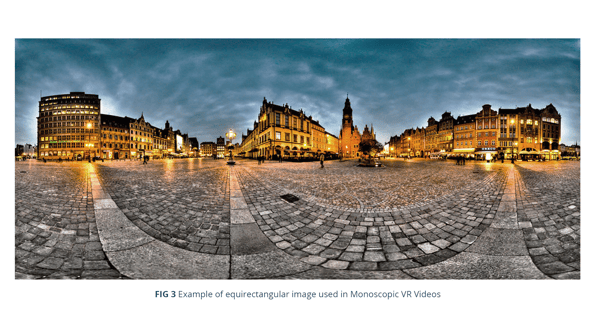 Stereoscopic VR video uses two video containers, one for the right eye and one for the left. This gives the viewer a sense of depth and perspective for people or objects in the video. The containers are either shown side by side, or as top and bottom, so it’s the same video file played from slightly different perspectives. Stereoscopic video can only be viewed with a VR headset, but is seen as a more immersive experience than monoscopic. In stereoscopic it’s possible to have a parallax effect, which means that an object may seem out of place to the viewer if it was moving at a different speed throughout the shot. 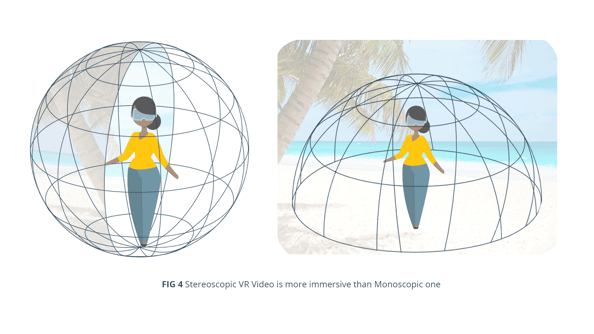 There is also a format of VR video known as VR180 or 180° video. It is also a video file that contains two containers, one for each eye, but only for a “front-facing” field of view. This format is great for video content where all of the interaction or subject is in front of the viewer. It is not nearly as immersive at 360 video, but still allows the viewer to move their head around and look at what’s in front of them.

Virtual reality could be the new way you hold your business meetings, teach your students, or train medical professionals, pointed out by this article from Forbes. There are many leaders in the industry who are already experimenting with making VR 360 video even more immersive such as CNN, Facebook and Twitter. Looking at the VR and 360° content of one of our customers, CNN, it is clear VR and 360° videos have a clear advantage when it comes to storytelling and transporting viewers into the content.

Technical implementations of VR 360 video can be challenging without the right player or support. Our THEO Universal Video Player allows you to render 360 videos in 4K in your browser and mobile devices. Along with 360 video playback, our Universal Video Player provides integration with VR devices through stereoscopic view, dubbed stereo mode. 360 degree video is a type of video where every angle from a single viewpoint is recorded and can be played back. It offers a great sense of immersion for panoramic imagery or simulation purposes. THEO Universal Video Player allows you to render these videos in your browser or on your mobile device, with a full set of API controls to control the viewing direction. The VR Add On exposes the VR API. This API allows developers to change the pitch, direction and more.

To indicate that your stream contains 360° content, simply pass a valid VRConfiguration as vr property when setting player.source. For the full list of properties and events related to 360° video and VR, go to our API page in THEO Documentation.

An example of setting THEOplayer to start in 360:

Check out our Demo Zone for a THEO Universal Video Player VR Add On demo. The VR Add On exposes the VR API, which allows developers to change the pitch, direction and more.

If you have any questions about configuring VR360 for your use case, contact our THEO experts.