THIS IS A SNIPPET FROM OUR “CSAI VS SSAI: BEST BANG FOR YOUR BUCK” GUIDE WHICH YOU CAN DOWNLOAD HERE.

Previously, we’ve covered the differences between Client-Side and Server-Side Ad Insertion. In this article, we will talk about the technical things to consider when deciding between them. You can find a more in-depth explanation of this in the “CSAI vs SSAI: Best Bang for Your Buck” guide.

Transitioning between contents and ads

Switching between content and ads is relatively easy for CSAI ads, because most platforms allow the use of multiple decoders at the same time. A player could then load the content in one video element and preload the advertisement in another one. In practice, it is slightly more complicated. Real-world environments are complex and diverse.

In video-on-demand use-cases, it is easy to indicate when a CSAI video advertisement should play. For live streams, it is slightly more complicated for a variety of reasons:

Interactive advertising allows direct engagement between the advertiser and the end-user, as it can deliver a more interesting, dynamic ad experience.

Traditionally, CSAI has been stronger on this front, due to the VPAID specification. Up until 2019, there was no SSAI-counterpart for the popular CSAI-specification. With the release of VAST 4.2 and SIMID/OMID as the successors of VPAID, this shortcoming is now solved, as SIMID is compatible with Server-side ads.

The change in design through SIMID allows the player to reuse

the same interactive layer for both CSAI and SSAI ads.

The key factor to look out for is adoption: SIMID is relatively young and still needs to find its place in the market. Google DFP already started supporting this specification via its Google IMA-library.

APIs such as canvas and WebAudio are not always considered when using Client-Side Ad Insertion approach. This is partly due to vendor limitations. For instance, Google IMA, the most dominant framework, renders its own ads in an iframe. This makes it impossible to connect these APIs. Since SSAI are always in stream, it is unlikely that you will face this problem with any SSAI-provider. Generally speaking, SSAI has these APIs out of the box while CSAI will entail more limitations. 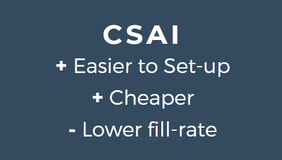 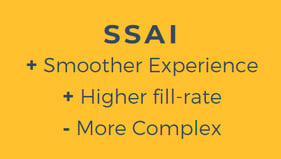 SSAI is a bit more complex to set up, and slightly more expensive, but it provides an overall smoother experience. If you like to know more about what might be the best solution for your project or use case, do not hesitate to reach out to one of our experts. You can also download the complete version of this topic in our “CSAI vs SSAI: Best Bang For Your Buck” guide here.